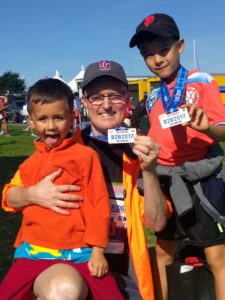 After 5 years in Cupertino, the Wykoff-Piñón family has settled in to Silicon Valley life. Vic Wykoff (CdeP 88) celebrated his 2-year anniversary as chief data scientist at SAP Ariba this September. Vic still enjoys camping and sports, but now he’s the coach! Vic is coaching Little League baseball in the spring and AYSO soccer in the fall. “My goal is for the players to want to play again next year!” Vic looks forward to running in the Half Moon Bay Pumpkin Run in October with his two favorite running-mates, Patrick (10) and Thomas (7), pictured after the San Francisco Bridge to Bridge race in 2017.

In June 2018, the whole family enjoyed another inspiring reunion at Thacher (30th!). Thank you to *all* of my classmates for making life so much more! The second picture captures Peter O’Brien (CdeP ’88) and Patrick Chu (CdeP ’88) entering the Gymkhana Field at the end of our class ride. 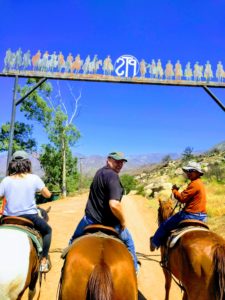