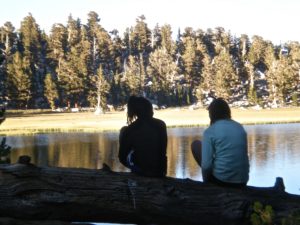 Standing in the grocery store line a couple of days before Thanksgiving, four items beyond Express Lane maximum, I tore my gaze away from the magazine racks (recent challenges for Britney, the Queen’s real feelings about Kate, how Jen stays fit at 48) to check how long it would be before my turn. What was heading down the conveyor belt ahead of me was, given the timing, an interesting assortment: graham crackers, hot dogs and buns, marshmallows, bags of chips, relish and mustard, lighter fluid, Duraflame logs. Nary a cranberry in sight. The woman now opening up her canvas bags to receive the odd bounty turned to me cheerfully: “We’re having a different kind of Thanksgiving this year. We’re going camping!”

I caught her excitement: “That is so great! We did that for Thanksgiving one year–and it was one of our best ever!” Memory flash of hitching truck to trailer, of onloading Pablo and Colby, tack and pack saddle and panniers, a quick Vons stop for pre-roasted chicken, then hauling up the Maricopa Highway, switchbacks a slow ribbon into blue sky and the foothills of the Los Padres. Then down through Rose Valley and up and over the hill and the surprise, despite repeated experience of it: the massive slabs of Piedra Blanca right there, stretching stark and bold, portal to generations of Thacher adventures.

“Oh! Well, actually, camping for us is, ah. . . well, we’re going to San Bernardino. Our kids are into ATVs, so we got an RV spot down there and we’re taking their 4-wheelers and taking our smoker and stuff for the turkey.”

At one time in my youth, this might have been my idea of camping, too, if my family had done any such thing. (Though we spent lots of time in the outdoors, we didn’t camp, because we didn’t “need” to: we–and animals both domestic and wild–lived at the edge of the woods in rural New Hampshire and being outdoors was just a fact of everyday life. Camping would have been beside the point.) And I do understand that, for many in this world, it’s a way–maybe the only way–to get outside and into some version of nature. San Bernardino is, after all, not just a city; it’s also a national forest, with trails dedicated to OHV activities.

But I’m spoiled now, by what I think of as The Real Deal, for which I–and generations of Toads–have Thacher to thank.

Thankful isn’t necessarily what I always felt about camping, my early Thacher trips marred by having the wrong gear (too heavy, too light, too much, too little), by weather events for which I was psychologically and experientially unprepared, by not understanding the critical importance of fiber in pill form or the power of chamomile after supper. Now, though, I understand that these trips were not so much marred as I was simply not yet up to what our esteemed Head of School refers to as Carefully Calibrated Challenges. Like every Thacher student and some faculty new to Prepare for the Worst/Hope for the Best, I had to learn my way into appreciation, a slow accretion of gratitude by trial, error, and correction. Some of the lessons: looking up rather than at my feet, even when backpacking on a rocky trail; not “saving” my layers for when I got “really cold”; tuning food prep to meet sophomore boys’ dietary needs (one bagel per day is not enough by a factor of several); reconsidering the effect on core temperature of staying cozy in my sleeping bag with a full bladder over braving the middle-of-the-night arctic blast.  And now, many EDTs on, and having gained from student-campers more than I’ve ever given (see this post from six years back), I know that car camping and what we do are as different in both content and impact as the night sky of much of the U.S. is from the sweep of infinite star-points at midnight, spied from a sleeping bag through lodgepole pine treetops. “Between every two pines is a doorway to a new world.” John Muir 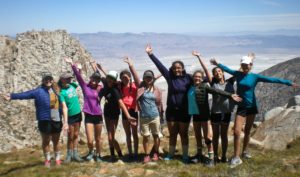 The Vons encounter preceded by only a day some forced downtime for me. Being laid low with the cold making the rounds wasn’t all bad: unanticipated reading time always makes me feel better, soul and body. On my list was a series of  articles pushed to my inbox by the Greater Good Science Center at UC Berkeley, a resource I read whenever I can because it inevitably contains compelling material topical to my work as an educator. Plus, I’m partial to one of the regular contributors, Christine Carter; beyond her research and writing being sharp, accessible, cutting-edge and highly relevant, she’s a Thacher alumna, parent of a junior girl, a past Board member, the talented emcee of our recent The Good Goodbye–and the student who helped Michael pick out a birthday puppy for me

The article I started with–How Teens Today are Different from Past Generations–wasn’t actually one of Christine’s, but it did make me consider the power of serendipity, for there, in the middle of it, was both the explicit connection to my recent thinking about camping and even more reason to be grateful for Thacher’s holding the Outdoor Program so dear. The review of psychologist Jean Twenge’s longitudinal work in the area of iGens included this:

iGens–the demographic cohort born between 1995 and 2012–“grew up with cell phones, had an Instagram page before they started high school, and do not remember a time before the Internet,” writes Twenge. They spend five to six hours a day texting, chatting, gaming, web surfing, streaming and sharing videos, and hanging out online. While other observers have equivocated about the impact, Twenge is clear: More than two hours a day raises the risk for serious mental health problems.

She draws these conclusions by showing how the national rise in teen mental health problems mirrors the market penetration of iPhones—both take an upswing around 2012. This is correlational data, but competing explanations like rising academic pressure or the Great Recession don’t seem to explain teens’ mental health issues. And experimental studies suggest that when teens give up [social media] for a period or spend time in nature without their phones, for example, they become happier.

Four words: spend time in nature, linked to a zinger: happier. Of course, there are two kinds of happy: the feeling of cheer, of pleasure or contentment, and the sense of good fortune. (Think of Friar Laurence upbraiding Romeo when the latter comes around pewling about having been banished to Mantua. The Friar slaps him with one example after another of the blessings in his life, each followed by, “There art thou happy!”) When I think about Thacher camping trips, both definitions apply: by sweat and blisters, by drizzle or downpour or blast-furnace heat, by petering-out trails, by bushwhacking and soldiering on, by being uncomfortable or in even what we’d call distress, we ultimately find pleasure on the other side: the trail spotted far below, the welcome cool at sundown, the sense of being bigger, better than when we pulled out of campus, in a Suburban or on a horse. A plaque with a quotation from Dostoevsky’s The Brothers Karamozov that hangs In the Boswell Library gets at a little of this: And even if we are occupied with important things, if we attain honor or fall into great misfortune—still let us remember how good it once was here, when we were all together, united by a good and a kind feeling which made us. . .  better perhaps than we are.)

As for the second definition, that applies, too: fortunate to be in a school that requires Real Deal camping of all of us twice yearly, rain or shine or both.

That could have been the end of this blog. (Those still reading: Bravo! Brava! You are demonstrating Thacher qualities of grit and tenacity!) But more serendipity tripped lightly in as I was finishing it up just before the Thomas Fire hit, another ping from the Greater Good folks. It wasn’t merely more excellent news; it was relevant to my sense of what Thacher provides as a fairly constant diet. The article spoke of a recent study found that, “living in close proximity to forest land is linked with strong, healthy functioning of a key part of the brain. . . [that] compared with those who live in a mostly man-made environment, people who dwell on the border between city and forest may be better able to cope with stress.” While this isn’t new news, it’s affirming of the way in which living on the Thacher campus complements the much bigger commitment to camping trips. “Previous research has linked access to green space to longer lives, lower levels of aggression, and kids’ cognitive development. One study suggests it even makes for nicer people.”

If there’s the great outdoors, then there’s a lesser outdoors, and it, too, has a salutary effect on all of us who get to move in it. Even when we’re not off backpacking or paddling a kayak, we live in a school of outdoorsyness. We get outside every time we move from classroom to lab to Assembly to the d-hall to our homes/dorms to court, field, and gym. We can’t not be outside, and hooray for that.

Now, if we can just hold onto the keep-our-cellphones-out-of-sight rule on those campus paths and byways, we’ll have a pretty reliable shot at daily happierness.