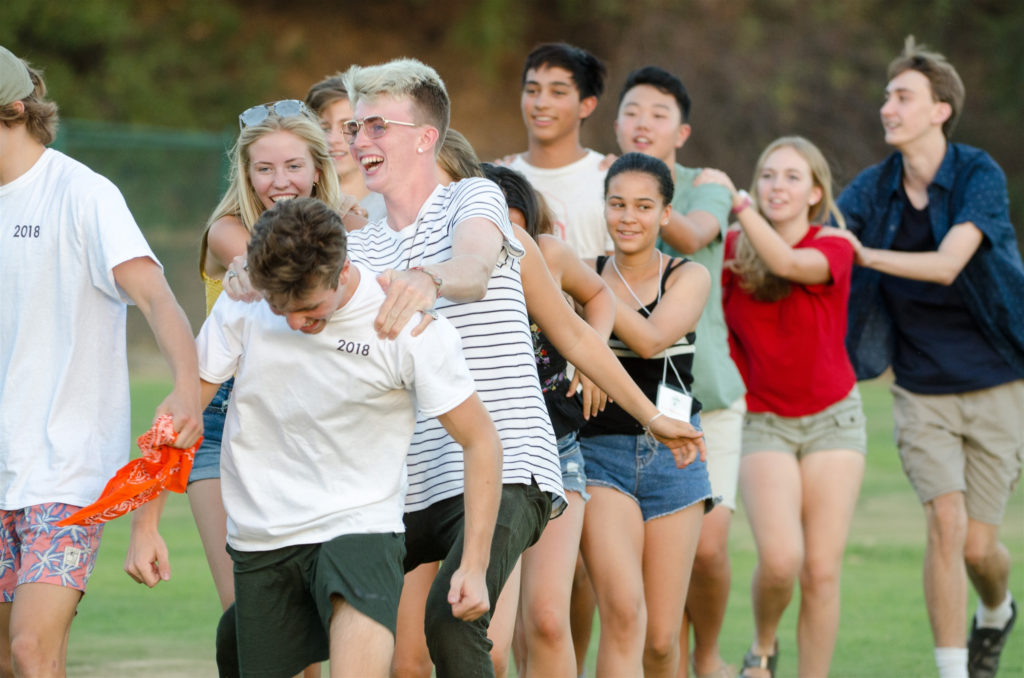 Yesterday morning, twenty-four hours before students and teachers would return from Thanksgiving break, I was cutting across the sunshiny Pergola to fetch from Olympus any mail that might have arrived in the past few days. There, near the toadstool tables (historical home to post-Assembly grahamies and milk), I ran smack-dab into a happily meandering family of four, two adults, two tweens–big brother, little sister. Introductions revealed that they were visiting kin in Santa Monica for the holiday and had sailed the PCH up to Ojai to take a gander at a school that, even at nearly 3000 miles away from home in Massachusetts, had caught their interest when they met some former Thacher parents at a boarding school fair near Boston. For a few minutes, I (shameless devotee crossed with former admission director) couldn’t resist telling them about what makes Thacher unique among whatever schools they were considering. That southern California might seem a world away–the temperature yesterday topped out at 84, the precise reverse of how many degrees it was in the visitors’ hometown on the New England coast–but really, once you get on an airplane, you might as well go across all the States, if the fit is just right, right? That it was killing me that they were walking around campus without the kids and faculty and faculty kids and dogs and staff all here, because, honestly, that’s what makes Thacher live and breathe. It’s never the same on vacation, without all of that . . . energy. Though stories of the vibrancy we swim in daily when school’s in session crowded around me from every square inch of the space in which the five of us were standing and talking, I somehow had no words for it all.

Later in the day, thinking about this family possibly just starting on their Thacher adventure by walking on empty paths and through empty classrooms, peeking in empty dorm rooms, I remembered something that Joyce Carol Oates wrote once in a New Yorker essay, four sentences I’d clipped out and included for several years in the “Homeground” chapter of the reader I put together for my personal narrative writing elective for seniors:  A house: a structural arrangement of space, geometrically laid out to provide what are called rooms, these divided from one another by verticals and horizontals called walls, ceilings, floors. The house contains the home but is not identical with it. The house anticipates the home and will very likely survive it, reverting again simply to house when home (that is, life) departs. For only where there is life can there be home.

When we said our goodbyes, I told them I hoped that the fit would be just right, two years down the road, that he’d join many East Coasters who’d taken the leap and made the courageous commitment to a school of a different color far west of 495. (I didn’t mention it, but, of course, our founder was the original one of that sub-tribe.) If it is a match, he–and to at least some extent, his family–will soon know all about the verticals and horizontals of Thacher, the strength and endurance of that necessary but not sufficient aspect of Casa de Piedra. He will become, as thousands before him, part of the life whose absence I felt so keenly and whose specifics I found so difficult to translate.

P.S. As I’m finishing this blog, Ford Shaper (an early return from break because he ran in the State Championship cross-country meet yesterday) is sitting on an Upper School porch playing his beloved Martin guitar and singing “Country Roads,” his sweet baritone coming straight down the lawn and into our open windows, like so much scent of a Sunday morning in late November. There: a story, short and true.