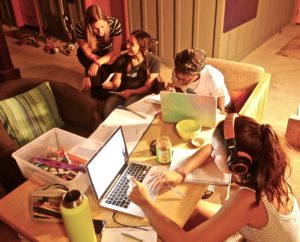 It’s possible that someone within the sound of my virtual voice recalls the kitchen scene in The Big Chill—although as one of my advisees informed me the other night, “My parents were hardly even born when that movie came out!”

I refer not to the beloved “Ain’t too Proud to Beg” dinner clean-up scene, but to a slightly later one that has stayed with me all these years. It’s the second morning of the weekend on which the seven friends from U Michigan, fifteen years on, have gathered to bury the eighth of their college cadre. One of them—Harold (Kevin Kline)—has in the interim built a running shoe company that’s about to hit the big time, and he’s comping sneakers for everyone in the house. In the sun-filled empty kitchen, the boxes are stacked on the large table. In a time-lapse sequence, each of the seven comes in for breakfast, notes the labeled boxes, takes the shoes. Different pairings and groupings coalesce and dissipate as people get coffee, sit down or don’t, cook up some eggs, eat, talk, stare into space. It’s the third time the kitchen table has brought them together in a span of a few hours. But kitchens do that. Tables-not-in-kitchens can do that, too: coloring, Bananagrams, cards, Connect-4, coloring at the big dining room table in our house on Saturday nights. Formal Dinner and informal, lunch and breakfast in the d-hall.

I’m sitting at another table on a Tuesday evening, doing dorm duty for the sophomore girls—the Chicas, as dorm head Ann Merlini calls them. This old workhorse table stands outside the Middle School common room under the porch roof that wraps around over the walkways at the courtyard’s inside edge. Study Hall al fresco for the senior prefect and me. The chairs around it are motley and mismatched, some a little caved in, all scarred by use. It’s been a hot September day in the Ojai, but the sun set half an hour ago and the air is finally cooling.

After everyone’s accounted for at 7:30, Zanna and I settle into homework. I’m prepping Beowulf for a senior elective in deconstructing narrative; she’s reading Hemingway’s Fathers and Sons. She giggles, and I ask her what’s funny. She says she’d be roasted by her English teacher if she wrote a sentence like the one she just read. I let it lie. A moment or two later, Fatoumata joins us, her room too hot and confining. “Are you on math tutoring tonight?” she asks Zanna. Zanna puts down her book, and the two are quickly down a rabbit hole of factoring and imaginary roots. I tune them out, focusing instead on how Beowulf’s dismemberment of Grendel and nailing up of his arm in Heorot Hall fits into the storyworld the seniors have begun to put together in class. Grace trots up to us to ask about studying math with Bella because ”her room has this, I don’t know, good math feel to it.”

About a half hour later, Celia comes up from her room and snuggles into one of the chairs, this one so low enough to put her only chin-high to the table. She pulls out her Latin III flashcards and softly repeats the vocabulary to herself. I drift in and out of listening, her words sounding like gentle incantations. Maggie, done with her other homework, pops out of her nearby room to join Celia in the quiz prep, perching on the arm of Celia’s chair and turning the vocab review into a volley that, in its quality and spirit of serve-and-return, pulls me out of my book. “Give me third person active indicative plural pluperfect of amo, amare.” I joke that it all sounds well and good, but what’s its application? When will you use it?  Maggie speaks for both of them, schooling me in what’s already obvious: “We take it because it’s fun!” (Last Tuesday during Study Hall, Maggie had told me all about Ovid and his love poems, The Amores, the author’s cleverness, his wit. “What a salty guy!”) Done with review, Maggie returns to her room. Celia goes back to quiet self-quizzing, miming “Yes!!!” and pumping her fist when she gets it right.

Relative silence for awhile, then Fatoumata asks me what I think about the two Head of School finalists so far. I turn the question back to her, and for several minutes, she thoughtfully analyzes the two she’s met or heard speak at Assembly. I’m amazed at her maturity, her insight, her common sense: “I’ll know more, I think, once we’ve met the last one,” Meanwhile, Zanna’s amused again, this time by an email thread growing not by the minute but by the second, involving students from all classes. Though it started as an all-student note about three missing water bottles, it’s now a pun competition, every missive a one-up (or down, depending on your p.o.v.) prompted by Mr. Meyer’s announcement at Monday’s Assembly that over the weekend, one of the two EAC hogs went missing from the pen out at the edge of the foothills. Hog, pork, boar, hogwash, pig, swine—many variations make it into the mix before an upperclassman steps in threatening a 9:30-10:00 to anyone who keeps the email alive. (I’m pleased to see, though, that at least one sophomore boy shares my appreciation for Pig-Latin.)

Celia and Maggie sign out for play practice. Maya, still in her volleyball clothes—“We beat Santa Paula 3-1!”—and hungry (missed connections on supper after the game) slumps into the sofa flanking one side of the table, the elation of victory soon dampened by the dawning reality that there’s no way she can finish all the homework she has tonight—“every subject!” She sighs deeply, then begins strategizing the rest of her night.

I remember a personal essay by Reynolds Price, A Day in the Life of a Porch, in which, basically, nothing happens—and everything happens. The “everything” is the dense, fibrous web of relationships that begin in threads of “nothing”—Uncle Brother reading the rusty thermometer when he gets up just after daybreak, Aunt Ida straightening chairs, picking up the newspaper and handing it wordlessly to Uncle Marvin, the author “swimming awake” after an afternoon nap, the train for Raleigh making its daily run. The piece ends in darkness and with neighbors, one porch over, calling “good-night” as everyone heads in to bed.

Life seems to be the nothing—the ordinary, the mundane—becoming, imperceptibly, the everything.

Later in the week, I’ll hear Maya jump into discussion in an English II class I’m visiting; her take clarifies the ending of All Quiet on the Western Front as a reflection of the narrator’s worldview. I’ll catch a quick “Hi!” with Zanna on the pathway of time and place between AP Computer Science and Assembly. I’ll cheer along with everyone else when Fatoumata correctly answers one of Mully’s Friday Assembly trivia questions and is rewarded with a book from our shelves. I’ll watch Celia vacuuming the family room carpet to within an inch of its life; she’s a rock-star cleaner-upper at Open House, On Sunday night, Maggie will tell me about her weekend at home with her family, celebrating Yom Kippur.

The holiday will be easy for me to visualize, having once been invited to a birthday celebration in her grandparents’ home many years ago, when they were still young Thacher parents to Maggie’s dad. The long table was exquisitely set, I recall—heavy linens, scads of flowers, best china and candles, a host of family, and friends crowded around it in conversation animated, very obviously, by familiarity and love.