Had an amazing trip to Nicaragua in December/January with Tom Crozier (CdeP 1977). He put me up (or put up with me?) at his house in Granada. We had many long talks about our classmates, Thacher, our lives since Thacher, and of course Nicaragua. He was a perfect host; even arranged Spanish lessons for me! Nice to have friendships that span 40 years.

I also see Peter Downey (CdeP 1977) all the time. We had a “sporting clays” outing with Nick Harvey (CdeP 1979) and my Dad a few weeks ago. Pete shot pretty well but was fighting with his ancient pump!

After ten years of trying, I managed to balance an egg on a smooth surface on the first day of Spring. This has been a tradition with Liz Westbrook, (Emma, ’75) for years. Liz sends me a pic of her egg every spring and as an engineer it makes me mad. This year I finally did it! 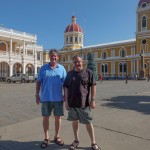 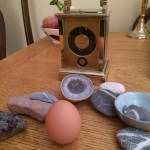 One Response to Tim Bowman ’77