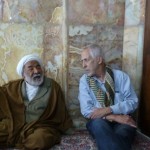 Most of my time is dedicated to natural resource conservation and management, in Iran, together with scientific information exchanges with the US. I spend 1 to 2 months a year there, much in the boondocks. Don’t believe the anti-Iran media. It is a remarkably interesting and hospitable country – especially for Americans!

This past Spring, my wife and I had the pleasure of joining Rhodes and Janice Spedale, in New Orleans, for the French Quarter jazz festival. We were together with the Knudsens, Farrands, John Haverly and Taylors. Great stuff!

During five weeks in Iran, despite most Iranians’ focus on upcoming elections (and fear, by some, to be seen with Americans), I was still able to meet with a good number of individuals from different levels of Government, international and local NGOs, academia, clergy and the private sector. My focus was on natural resource conservation issues – especially the challenges posed by drying wetlands – and scientific information exchange programs. Although I avoided politics, nobody else did! The elections and sanctions were constant topics of conversation – everywhere that I went. Many younger people had not seen an American before!!!

Although Reuters fired all of their staff save Caren Firouz, my nephew, he was under stress about his future with that company, as they consider their future plans in Iran and the rest of the ME.

The pollution in Tehran was bad and causes a lot of respiratory problems. I understand that hospital wards are full of cancer patients. Towards the end of May there was also a lot of dust in the air.

Fortunately, my friends Taher Ghadirian and Yaseman Talebi were able to take some ten days away from their work, which allowed us to make a 5,000 Km trip – to the Turcoman Steppes, Khorasan and Seistan, then back via the Northern desert and the Miandasht Protected Area. We visited the Golestan Wildlife Park, Tandureh WP and the new Hezar Masjed (1,000 mosques) Protected Area.

In the Turcoman Steppes, we visited the Khaled Nabih “cemetery” which consists of hundreds of very ancient fertility symbols (now reduced to dozens, through theft.) We toured the home of the famous Nader Shah (early 18th Century) who, among other things, invaded India and brought back the Kuh-e-Nur diamond and Peacock Throne. We were also able to visit the excavated ruins of a beautiful Zoroastrian Fire Temple.

In Meshed, I was privileged to pray at the tomb of Imam Reza and the next day visited the tombs of Ferdowsi and Omar Khayyom – in Nishapour.

In Gonabad, we visited the Sufi Center of that name, entered a ghanat that dates back to Achaemenid times, saw what is left of wind operated mills, and more. (I had an hour chat with Sheikh Baseri, who memorized the Qoran, all of Hafez and much more, before going blind.)

Zabol, on the Afghan border, was a major focus of the trip, because of my interest in the serious challenges faced by the inhabitants due to water shortages and dust/sand storms. In two days, I was able to get accurate information regarding the basic issues and see much of the irrigation infrastructure. The “old” bazaar was a real treat!!!

From Zabol, we travelled to Tabas, via Birjand, and then to the site where US forces tried to stage a rescue of the American hostages, some 33 years ago. From there, via the Northern desert, we went to the Miandasht Protected Area, where the Department of the Environment holds Kushki, a captive Iranian Cheetah.

Tehran itself is its usual combination of rich and not so rich. (There seems to be more begging and petty crime, compared with my last visit – six months ago.) I experienced Northern Tehran social life and also had a day with some old friends from the bazaar area, with many “taxi cab” conversations in between. As usual, the city of Tehran would win any international competition for the most challenging driving experiences.. There are new roads and buildings going up everywhere.

I have kept this very short, so as not to bore. Please contact me with any questions.