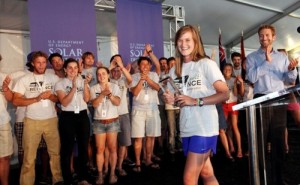 Katelyn accepting an award on behalf of her team for placing first in the Communications Contest at the U.S. Department of Energy’s Solar Decathlon.

Article from the SmartPower Tumblr:

Middlebury College campus sustainability leader Katelyn Romanov has won the title of America’s Next Eco-Star in the nationwide search for the standout among our country’s next generation of energy leaders.

Katelyn was selected by over 10,000 voters and a panel of experts to win the title, in a contest sponsored by SmartPower and the U.S. Department of Energy.

As a founding member of Sprout, a Middlebury student group dedicated to promoting environmental education in local schools, and the U.S. Green Building Council’s Middlebury student chapter, Katelyn’s clear capacity to organize and facilitate is what set her apart from the talented and diverse pool of young leaders from more than 100 schools across the country.

“We have found the future of energy and environmental activism – and her name is Katelyn Romanov,” said Brian F. Keane, SmartPower president. “Katelyn represents a new type of activist – one who combines energy and enthusiasm with a true understanding of what engages people.”

SmartPower was first introduced to Katelyn via Twitter when Middlebury’s Solar Decathlon team won SmartPower’s Social Media Energy Quiz. Katelyn directed communications for her crew and correctly answered the most energy questions from her team’s account: @MiddSD. It was the first time Katelyn impressed the SmartPower team, but it wouldn’t be the last.

More than 15,000 people voted in the first stage of the contest where Katelyn arose among the top 10 who moved along to the judging phases. Katelyn received 578 unique votes during the public voting period – a testament to her online campaigning flair.

One of the many awards Katelyn receives from the competition is a summer fellowship in SmartPower’s Washington, D.C., office where she will work closely with a team of energy experts to market clean energy and energy efficiency to the next generation of energy customers.

“We are thrilled to have Katelyn join us this summer,” continued Keane. “I hope she can learn a lot from our work, but I suspect that it’s all of us, and indeed the American people, who will be learning from her.”

In addition to her fellowship at SmartPower, Katelyn will receive a $1,000 grant to present to Middlebury’s sustainability office.