After nearly a year and half, and three ceremonies later (in addition to the civil ceremony), I am finally legally, culturally, and spiritually married to my beautiful wife, Hsueh-Fang (Zelia) Peng. The road to matrimony began with the civil ceremony in June, 2013 and culminated with the nuptial mass in Ventura, CA in September, 2014, with addition ceremonies in Taiwan in between. My best man and true sport, David Richardson CdeP 1986, stuck it out through it all while Mike Kim CdeP 1986 joined the wedding party in Taiwan (coming over from South Korea) and Larry Hsu CdeP 1986 joined us in Ventura. Other Toads in attendance at the Ventura shindig were Nancy Curry (Nichols) CdeP 1986 and Tom Kong Jr. CdeP 1981. 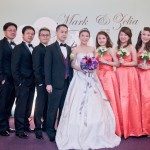 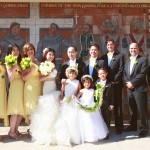